Blockchain technology is set to change the way we do things. It started with the financial industry; you know Bitcoin, Ethereum, and other Blockchain based platforms that are changing the way we store our money, move funds, and make transactions. Moving on to the latest victim of the Blockchain disruption, the Cargo Robot sector. SKYFchain is the first global Blockchain-based B2R (Business-to-Robot) platform that applies to all cargo robotic sectors.

SKYFchain is owned by SKYF, the first ever-heavy industrial freight drone that can take off and land vertically. The SKYF heavy cargo drone has many use cases, but the most common ones are emergency relief distribution, logistics, and agriculture. SKYFchain seeks to create a platform where all the data relating to drone operation can be stored, verified, and shared. The platform, launched with ICO, will be used to finance the cargo robot industry.

The SKYFchain Blockchain has a number of objectives, but most importantly, the platform will be targeting the integration of all critical information for all players in the market. This platform will have distributed records shared on the platform and will be the source of verified data relating to drone operations. Some the drone data that will be available on the SKYFchain platform include drone routes, mission plans, operation license info, pilot data, maintenance history, and drone specs.

The ledger will also be used to verify details such as the route and the permissions to operate the drone before it takes off to ensure safety compliance. Therefore, the SKYFchain platform will also be used to make the drone cargo industry safer, that qualifies as one of the company’s objectives too. When it comes to SKYF drones, SKYFchain reserves the rights for operations and support, verification, and mission planning. 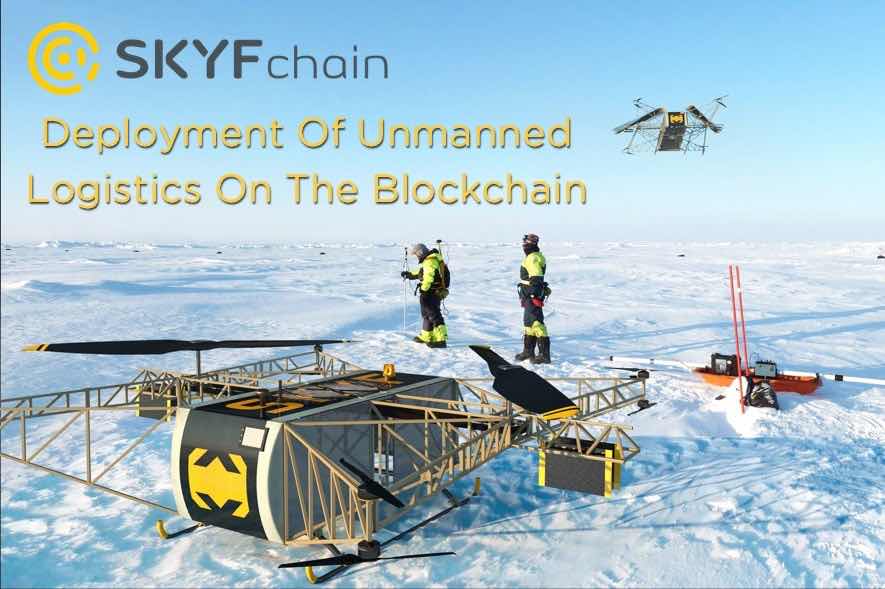 The SKYFchain platform uses the SKYFT token, the platform’s inbuilt Cryptocurrency, for all transactions within the network. The amount of SKYFT tokens is fixed, and all token holders are entitled to 70 percent of the earnings made on the platform. SKYFchain uses a smart contracts system to provide comprehensive information and substantive control over the assets to users i.e. people and institutions.

One of SKYFchain’s most important component is Blockchain. The Blockchain provides an inbuilt smart contract system that provides necessary data and gives the users a reasonable level of control of their investment. The platform wants to create a new airborne cargo drone industry and after that, introduce seaborne and ground-borne cargo robots into the platform. If successful, the SKYFchain platform will eliminate man as the intermediary in drone cargo industry.

SKYFchain looks promising. It will revolutionize the airborne drone cargo industry and open it up for everyone. There are a lot of reasons for investing in this blockchain. For starters, it’s unique. One of a kind. The SKYF drone is already making it big in the industry, and it can only get bigger.

Virtual Reality came out a few years ago. Back then, most people didn’t take it seriously, many actually never thought

In the 13th G20 Summit held in Buenos Aires, Argentina, the G20 has called for further actions to regulate the

Over the years, the technology of facial recognition has continued to be applied in several cases. From the collection of consumer data to identification and security, this technology is estimated to hit an industry valuation $7.76 billion by 2022.

The main aim of the Kairos ICO is to introduce their special facial identification methodology onto the Blockchain technology.

The Value Proposition of Kairos ICO

Basically, Kairos is a tech firm that has interest in facial recognition and artificial intelligence. The Initial Coin Offering conducted by Kairos is an opportunity where customers can buy both utility and security tokens for the onchain version of the platform that they currently use for facial recognition.

The system applies machine learning and computer vision to recognize faces in photos, videos, and even the real world. The Kairos utility token is in a very broad scope due to the fact that the architecture is designed to carry out three main duties.

• The first one is identity, which basically helps in searching and also verifying the faces.
• The other facet that this function is built off of is emotions. This is used for the purposes of measuring mood and sentiment.
• The last facet is demographics, which is used to collect demographic data concerning gender, age, as well as ethnicity.

All these three facets are widely referred to as the human analytics. As such, they can either be used at personal levels or in a group to gather information regarding certain persons as they go on with their day-to-day activities.

Apart from helping businesses by gathering for them certain data regarding the kind of customers that visit their stores, Kairos also assists in gathering important information on how the clients react and feel while responding to stimuli. As a matter of fact, Kairos is the only facial recognition service provider in this vast industry.

The Kairos also has a tokenized architecture that is based on two facets.
• The first one is the Kairos Security token {KAIROS}, which offers a great stake in the industry.
• The second one is the Kairos identity token, or utility {FACE}, which assists in gas to powering the main platform.

The holders of the security token will be awarded with one utility token, and this will cause their liquidity to come from the utility token.

The Strengths & Opportunities of Kairos

Kairos is one company that has shown a solid track record for the past six years they have been in service. They had an opportunity of working with IMRSV, an emotion analysis firm, which gave them a technology they included in their product. This is what brought in the branded human analytics item. Its ability to analyze an individual’s ethnic makeup makes it one of the best companies.

For the six years, Kairos has been operating; Brian Brackeen has been its Chief Executive Officer Brian is the one who founded the company after leaving Apple, where he worked as a Senior Project Manager.

The company’s CTO is Cole Calistra, while the company’s CDO is Ben Virdee-Chapman. Professional guidance to the members of this company is offered by Herwig Konings, who is the founder and the CEO of Invent Ready.

SKYFchain Review Blockchain technology is set to change the way we do things. It started with the financial industry; you

The main aim of Grain ICO is to create a solution that will enable organizations to manage work agreements that are on the Blockchain technology. This platform also creates a quick payment mechanism that can be used by these companies.

Grain.io assists firms save billions of money by offering middleman services that would, in turn, lower the processing costs of the payments that are remitted. Grain.io is basically a backend solution that enables freelancer platforms and labor management systems to consolidate financial transactions and smart contract on the Blockchain. GRAIN has been able to reinvent how organizations work and give the workers an opportunity of sharing their work success on the main platform.

Apart from easing the labor contracts, GRAIN also helps in other ways. The GRAIN ecosystem, at the same time, also introduces prompt, compliant, as well as a mechanism of fair payment; all these by ensuring that full security is maintained.

It has also incorporated the introduction of an online saving account that workers can use for any contract across the system. This service can also be used to pay for shorter-term needs or even pay into the pension. As a way of offering a feasible solution for enabling work agreements in various organizations across the globe, GRAIN will comply with any kind of regulation that is connected to labor.

In an effort of safeguarding both sides of the entire transaction, the protocol used by GRAIN also involves a special technique that can be used to handle the volatility faced by the digital currencies.

By applying the GRAIN.io Blockchain, a number of possibilities are opened. These are possibilities that can be used by Human Resource developers, payrollers, staffing agencies, accounting software as well as a host of other options.

In brief, the main duty of GRAIN is to give the hundred-billion-euro payroll industry not only a secure but also a free and transparent ecosystem by advancing the current system to one that entirely works by sharing principle.

The Benefits of Using the GRAIN.io Platform

It saves organizations huge sums of funds. GRAIN provides companies with a cheap alternative that would reduce the amount they use in labor. When they opt to use Grain for organizing their work agreements, they can save massive funds they would have used in acquiring expensive intermediaries and payroll services.

With each transaction, the transaction partners will stand a chance of getting up to 50% of the fee that is imposed on the customers.

With GRAIN, workers will never have to complain about late payments. All will be better off with this platform, and they would always share in the success.

The GRAIN.io is headed by Onno Hektor, who earlier worked with Microsoft as the director. Mr. Hektor is the president of the board and is closely assisted by André Bonvanie and Erik Koster, who are both board members. Jeroen van Megchelen works for GRAIN as the blockchain expert. The other senior officials that make up the team are Lucas Huizinga, Artem Gorev, Philippe Vanderhoydonck; and Hans Hoogerveen & Steen Deurloo, who are both members of the advisory board.

SKYFchain Review Blockchain technology is set to change the way we do things. It started with the financial industry; you

Over the years, the technology of facial recognition has continued to be applied in several cases. From the collection of